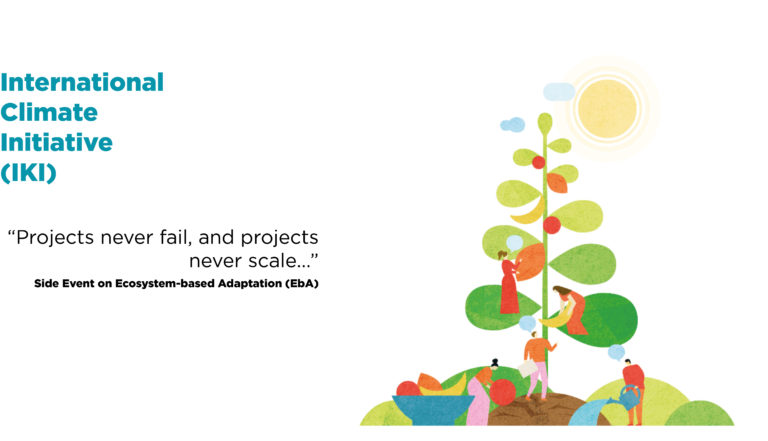 The agenda of the workshop can be found here.

Ecosystem based Adaptation (EbA) offers nature-based solutions for people and ecosystems to cope with the impacts and risks of climate change, making active use of ecosystem services, biodiversity and participatory approaches3,4,.5 EbA measures include, e.g. aquifer recharge to mitigate the impacts of droughts or restoring mangrove forests to counter coastal erosion and floods.6 EbA contributes to wider socio-economic development, for example by enhancing local communities’ livelihoods and health. It thus speaks to a wider range of policy priorities, beyond adaptation.7 Despite the potential and value of EbA initiatives to increase adaptive capacities and reduce vulnerabilities, EbA uptake into policies and practice remains limited.

Workshop objectives
Based on the outcomes / main findings of the GSW, the overall objective of the side-event is to stimulate a new discussion on how to improve donor-funded projects to create a more enabling environment for upscaling EbA, to ensure long-term sustainability in EbA investments (Which factors are missing/hindering for good practice examples to be scaled, are there initiatives in which some kind of transfer or upscaling has worked?).

Pilot projects abound. As the saying goes, “Projects never fail, but projects also never scale”. Upscaling EbA is more than mainstreaming the concept into policies at different levels. It also needs to go beyond replicating specific adaptation practices or knowledge across regions. Successful projects might be the result of sustained external investments, high levels of social cohesion and in a community or the result of political will and strong local leadership. At the same time, only very few – nature-based solution – projects do scale beyond their initial scope and are sustained after the official phase-out of a funded project.

During this IKI-funded EbA side-event to the GSW, the factors that hinder the sustainability and possible scaling of successful projects after their external funding period ends will be analysed together with EbA practitioners and decision-makers. The question to address will be how successful interventions can be continued in the long-term, sustaining their results and activities and the scaling of the same beyond the initial geographical scope. The commitments of governments to global Agreements such as the Paris Agreement (nationally: NDCs) and the SDGs have created a moment of political opportunity in which climate change and adaptation plans are evolving, to harness the full potential and benefits of EbA. As the EbA and natural resource management sector is highly donor-driven, the side-event will be focusing on donor-funded projects, trying to identify why projects/ activities, results, achievements, after their funding period, are often discontinued and not replicated. Mainstreaming EbA into policies cannot be the only answer to that.

We use cookies to ensure that we give you the best experience on our website. If you continue to use this site we will assume that you are happy with it.Ok