By Atula Owade and John Agboola

The creation of an enabling environment for sustainable and climate resilient agriculture in Africa and across the globe requires a better understanding of the ecosystem and the importance of nature-based solutions. One of the outcomes of the Global Soil Week 2019 was the conclusion that protecting and rehabilitating soils is an urgent matter.

This urgency is informed by the undying fact that soils are being degraded at an unprecedented rate,  consequently leading to negative impacts such as loss of biodiversity, desertification, and famines. To counter these issues, the UN Environment has declared 2021-2030 as the Decade on Ecosystem Restoration.

In Africa, the program seeks to restore 100 million hectares of degraded lands by the end of the decade. Coordinated by Tim Christophersen, the UN Program recognizes the vital role that the youth will play in achieving such an ambitious goal of ecosystem restoration. Therefore, it has put in place several measures aimed at making youth play an active role in global ecosystem restoration efforts.

The launch of ecosystem community champions

Humans tend to look up to their peers who are doing something positive in their communities. This is true for all demographics of people, including youth in agriculture. Africa is poised to have the youngest population in the world within the next couple of years, and hence, having community champions for ecosystem restoration would be a great way of speaking to them.

The Program recognizes the vital role that community champions play in influencing others to take initiatives aimed at restorative practices. The organization is, therefore, currently in the process of identifying and recruiting such individuals to spearhead the restoration efforts.

Tim declared, “young people are critical to attaining the ecosystem restoration agenda and this will create opportunity for young people to create real impact in their communities.”

The youthful generation in most African countries and across the globe is tech savvy. Most have grown in the information age and are therefore digital natives. As such, the UN Environment is putting in place several measures to reach this demographic via a set of digital streams. The organization is currently building a dedicated website to be launched in a few weeks that will contain rich information about ecosystem restoration. These include details on sustainable agricultural practices, policies touching on the issue, and program initiatives. At the same time, the organization is working on social media and communication strategies specifically targeted at young people to make them aware of the role they can play in ecosystem restoration, and hence inspire positive actions for the UN Environment 2021-2030 decade on ecosystem restoration. 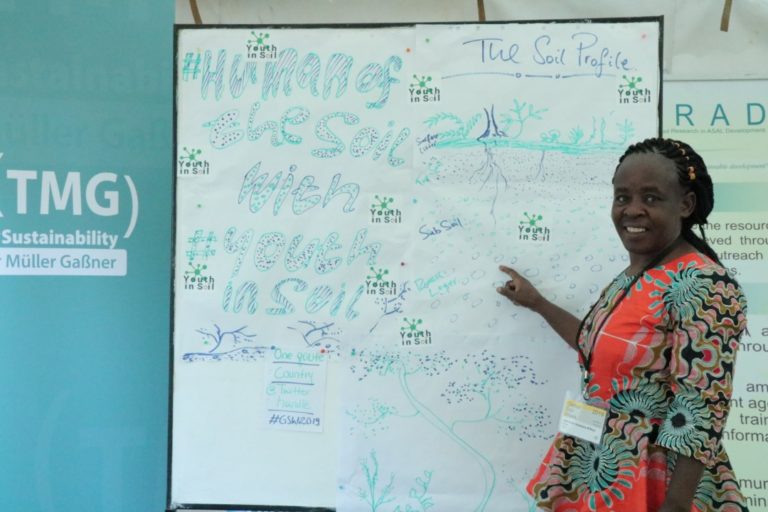 Tim Christophersen describes himself as, “father of two great kids who deserve a safe and green future.” This partly informs his work and that of his team at the UN Environment. In an open recent discussion with GSW2019 youth delegates at the UN Environment campus, Tim acknowledged that restoration efforts will be possible if there is political goodwill.

The political climate needs to be right through formulation of supportive policies, such as those that will enable the youth practice restorative agriculture, said Tim. Working with partners such as FAO, the UN-REDD Program, and the Global Landscapes Forum, his organization is spearheading the push for policies that will aid the creation of a global ecosystem restoration movement. Consequently, this will limit climate change while improving food and water security and also, create green jobs for the youth on a global scale.

Investing in youth across ecosystem restoration

Inspired by wise words that the greatest sign that one has faith in you is when they are willing to invest their time and money to empower you, it is time for youth to act.  The UN Decade on Ecosystem Restoration supports various initiatives that are designed to provide entrepreneurial youths working in ecosystem restoration with the tools they need to succeed.

One such initiative is the Land Accelerator Program, which is designed to boost business opportunities among the youth by helping make ecosystems healthy. This is a free 6-day training for those who are involved in restoration of degraded lands and revitalization of rural communities for climate action.

In addition to helping improve their business skills, the accelerator presents participants with access to potential investors, said Tim.

To learn more about restoring degraded planet and why stakeholders need to invest, and track the pay off, read from Tim’s citation here.

article français Benin Burkina Faso ecosystem restoration Ethiopia extension services gender Ghana GSW2019 Kenya land tenure Madagascar Malawi Nigeria partners sustainable land management sustainable land use
We use cookies to ensure that we give you the best experience on our website. If you continue to use this site we will assume that you are happy with it.Ok